Solar and inverter solutions for commercial and industrial vehicles. 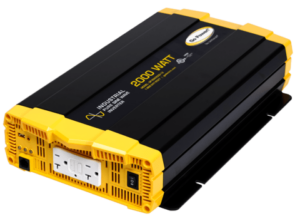 There are two main differences between a pure and modified sine-wave inverter: efficiency and cost. Pure sine wave inverters are good at two things: efficiently powering devices that use AC, and powering devices like radios that can suffer from interference. But, they can be expensive. On the other hand, a modified sine wave inverter may produce some interference, resulting in a less-than-pure current, but they are less expensive than their pure-sine counterparts.

All our industrial pure sine wave inverters have UL certification. These inverters are an ideal choice for any fleet or utility truck and can reduce your vehicle’s idling and your dependence on a generator. Install a Go Power! inverter system to control fuel consumption and reduce maintenance while eliminating avoidable greenhouse gas emissions.